"To finally be able to monitor music with this level of accuracy and detail is an incredible experience for me. The SCM50ASL Pro's are definitely taking my work to the next level."
- Omar Hakim, 2015 (musician/producer/arranger/composer) 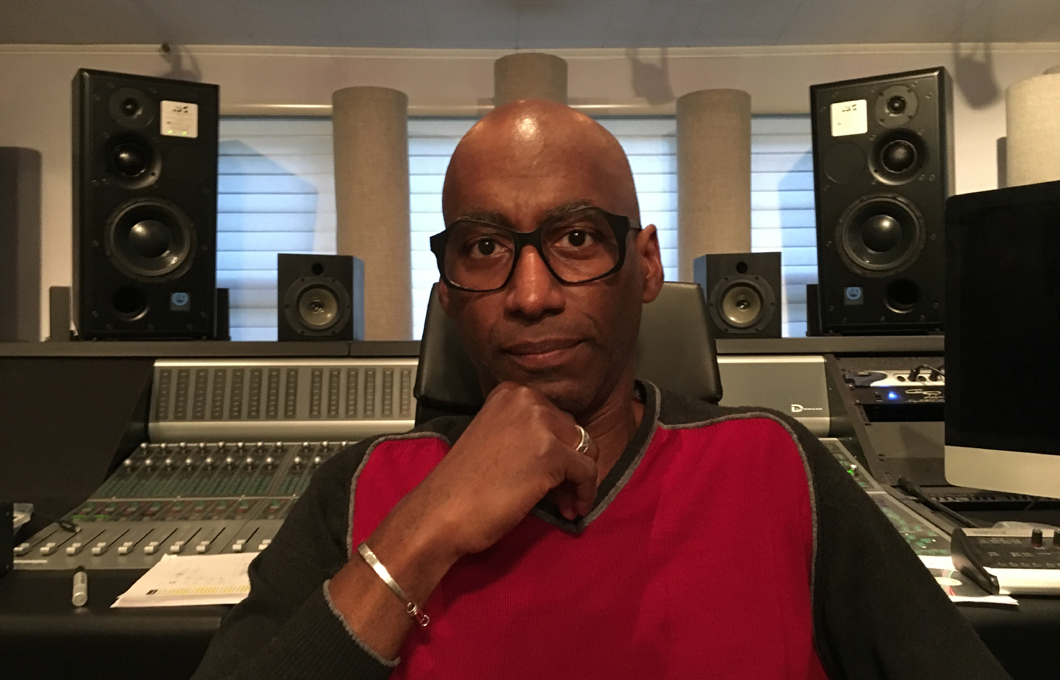 NEW JERSEY, USA: specialist British loudspeaker drive unit and complete sound reproduction system manufacturer ATC is proud to announce that Omar Hakim has installed a pair of SCM50ASL Pro threeway active monitors in his personal studio — The OH-Zone — sited at his New Jersey home, having had a guided tour of the ATC factory facilities in Stroud, Gloucestershire, UK...

According to his official website, Omar Hakim is: "Widely acclaimed for his versatility, technical prowess, and groove [and] is one of the most successful session drummers of the past forty years." Yet the acclaimed American jazz, jazz fusion, and pop music drummer, producer, arranger, and composer certainly needs not blow his own trumpet too loudly, so-to-speak, for his association with top-tier acts as varied as Miles Davis, Marcus Miller, Weather Report, Sting, Daft Punk, Michael Jackson, Madonna, Kate Bush, Dire Straits, and Journey surely speaks louder than words.

When ever-present US rock band Journey's longtime drummer, Dean Castronovo, was arrested during their 2015 North American summer tour they turned to Omar Hakim to capably walk in his percussive shoes at arguably the shortest notice in high-flying touring history — less than 24 hours! However, when reclusive English singer-songwriter, musician, composer, dancer, and record producer Kate Bush ventured out on stage as a headliner late last year for the first time in 35 years for a sold-out string of no fewer than 22 'intimate' theatrical shows at London's Eventim Apollo theatre — the admired, albeit renamed venue where her only concert CD to date, Live At Hammersmith Odeon, was recorded way back in 1979, it was with Omar Hakim holding down the perfect beat throughout those career-spanning shows... shows that indirectly led the demonstrably in-demand drummer to ATC, as it happens.

"I didn't become aware of ATC until I began working with Kate Bush," begins Omar Hakim himself, before adding: "Her engineer was the great producer/engineer Greg Walsh, who set up a control room space at the rehearsal location during pre-production for the London shows. That's where I heard ATCs for the first time — SCM100ASL Pros, I believe. I was immediately blown away with what I was hearing. That was the first time that I had ever heard a speaker reproduce audio like that! Then I had the pleasure of doing some show prep at Kate's personal studio, where I think she had SCM150ASL Pros — fantastic!"

So when it came to upgrading the main monitoring at The OH-Zone, his own personal studio back home across the pond in New Jersey, it was an ATC done deal as far as Omar Hakim was concerned: "I was thinking of getting SCM25A Pros — until I heard the SCM50ASL Pros at the ATC factory, having had the pleasure of getting a factory tour and sitting with Managing Director Billy Woodman to audition several ATC models. I decided to go with the SCM50ASL Pros because I could hear the difference in the low-end response. I also knew that for my purpose of tracking live drums and small rhythm sections they were the right choice for me! To finally be able to monitor music with this level of accuracy and detail is an incredible experience for me. The SCM50ASL Pros are definitely taking my work to the next level."

Not that Omar Hakim has ever been short of session work, mind — most recently recording drums for the Grammy® award-winning Random Access Memories album by breakthrough French electronic duo Daft Punk, as well as recording, mixing, and producing his third critically-acclaimed solo album, We Are One, at The OH-Zone. The Trio of OZ, the band he formed with wife Rachel Z in 2010, are currently working on their second album, all set for release on his OZmosis Media Group label in 2016: "I've recorded and mixed three albums there, and I also do lots of sessions for clients around the world that send me tracks to put drums on."

Omar Hakim has plans to build a new home and studio, so his beloved SCM50ASL Pros will definitely be making the move, too: "I've always had a deep appreciation for technology and the thought, ingenuity, and commitment needed to bring it to the world. Billy Woodman and the crew at ATC are craftsman of the highest order. From the beautiful wood cabinetry to the speaker components and electronics, ATC speakers are simply amazing!"

ATC (Acoustic Transducer Company) is a specialist British manufacturer of loudspeaker drive units and complete sound reproduction systems, including all associated electronic equipment. All such systems and components are designed and built in-house to achieve levels of performance far in excess of the industry norm by adopting a thoroughly professional engineering approach to the issues of basic design, materials science, and production technology. Formed in 1974 to manufacture custom drive units for the professional sound industry, ATC's groundbreaking 'Soft Dome' mid driver technology was originally developed in 1976 and is still featured in the company's current SCM25A Pro, SCM45A Pro, SCM50ASL Pro, SCM100ASL Pro, SCM110ASL Pro, SCM150ASL Pro, SCM200ASL Pro, and top-of-the-range SCM300ASL Pro three-way active professional series loudspeakers. Constantly improved, it is still unique in innovation, and remains the only midrange device capable of delivering ultimate performance; flatteringly, it has been widely copied — without success.

Similarly, the 'Super Linear' technology found in ATC's professional series bass drive units is equally unique — not only in its ability to accurately reproduce piano, but also the precise manner in which male voices are articulated. All drive units in ATC active professional monitors are powered by their own ATCdesigned amplifier, optimised for the relevant bandwidth, and all amplifiers — working substantially in Class A — feature even-order-filtered active crossovers that are individually aligned and phase-corrected to ensure unmatched stereo imaging.